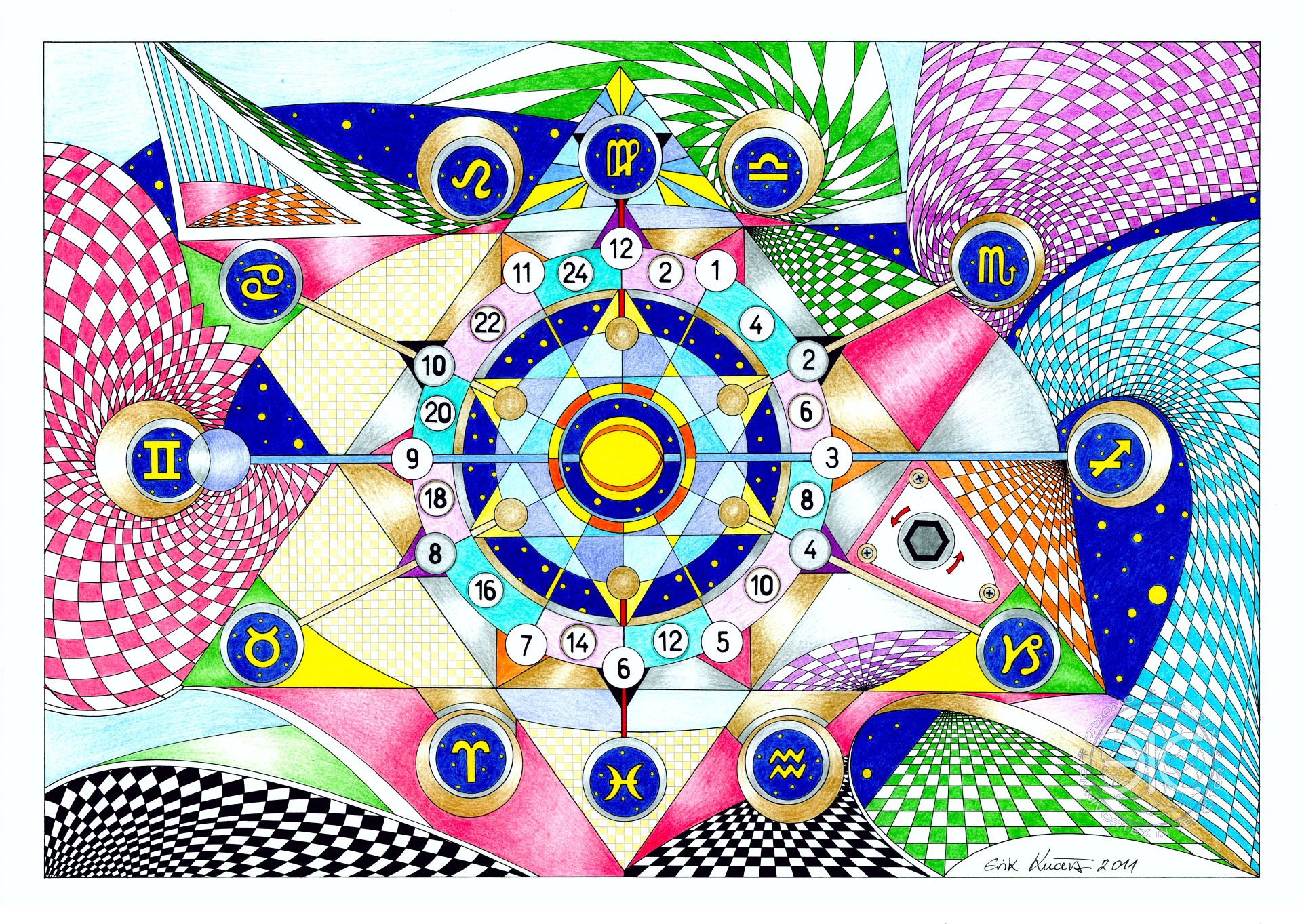 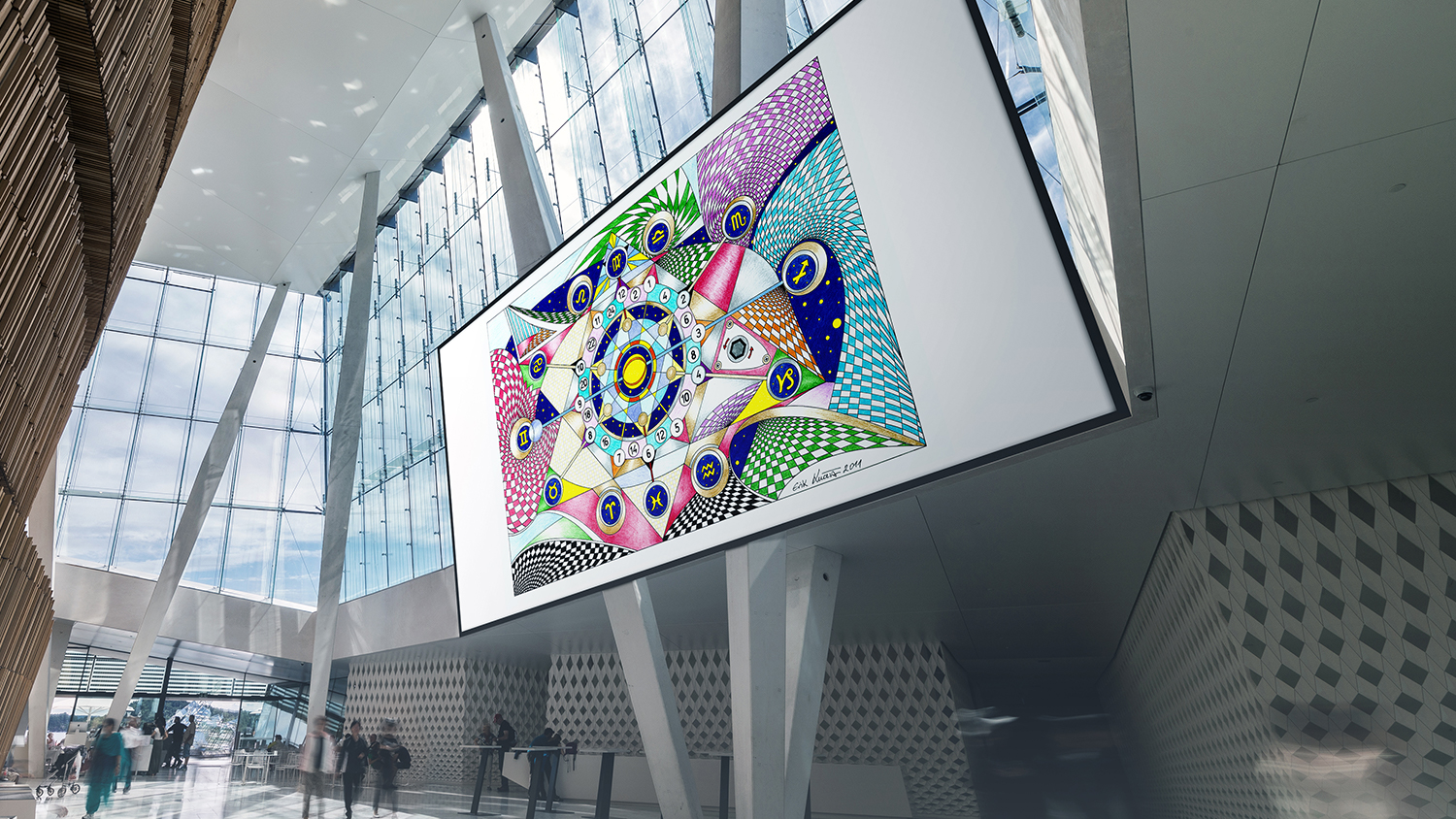 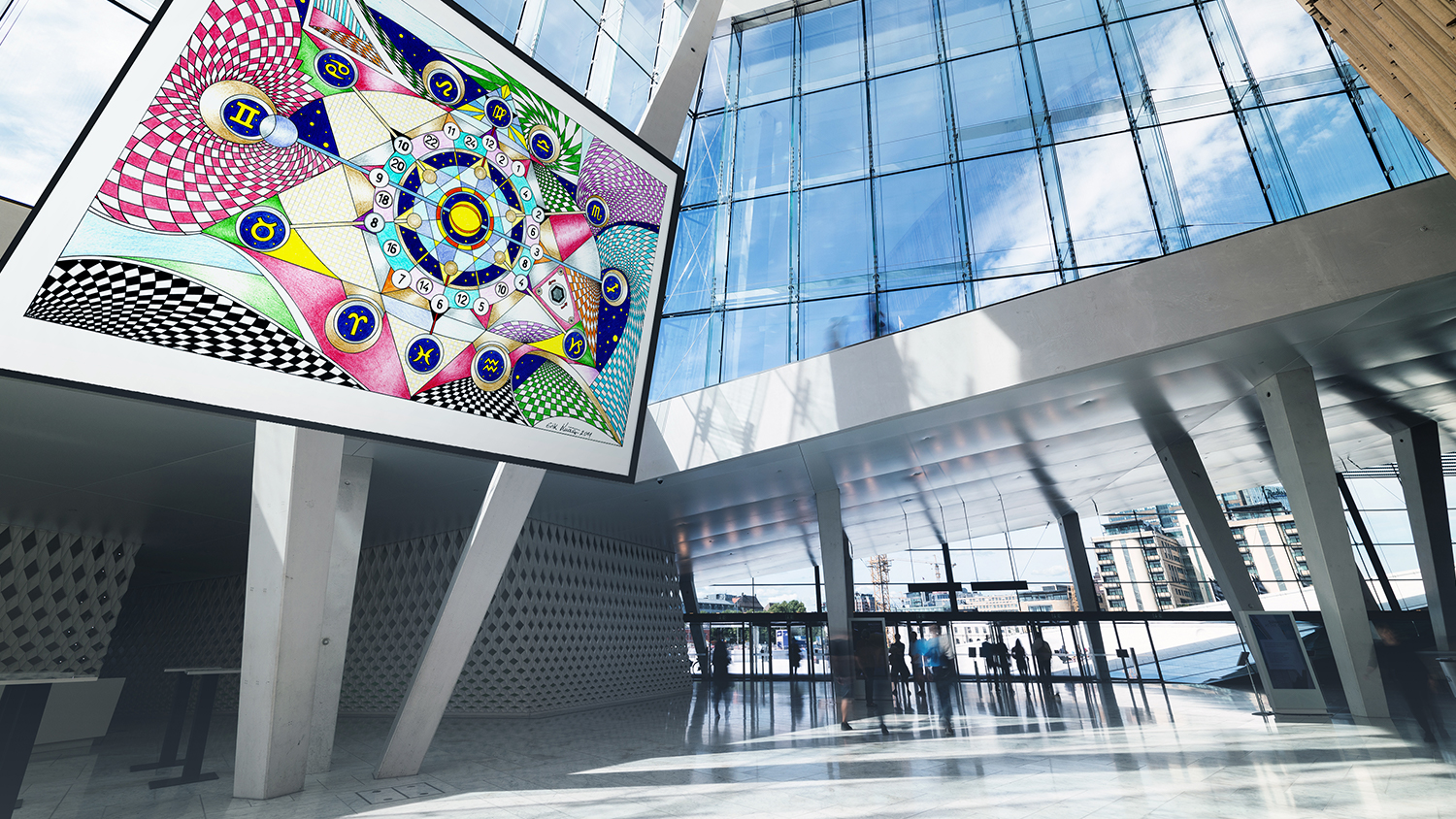 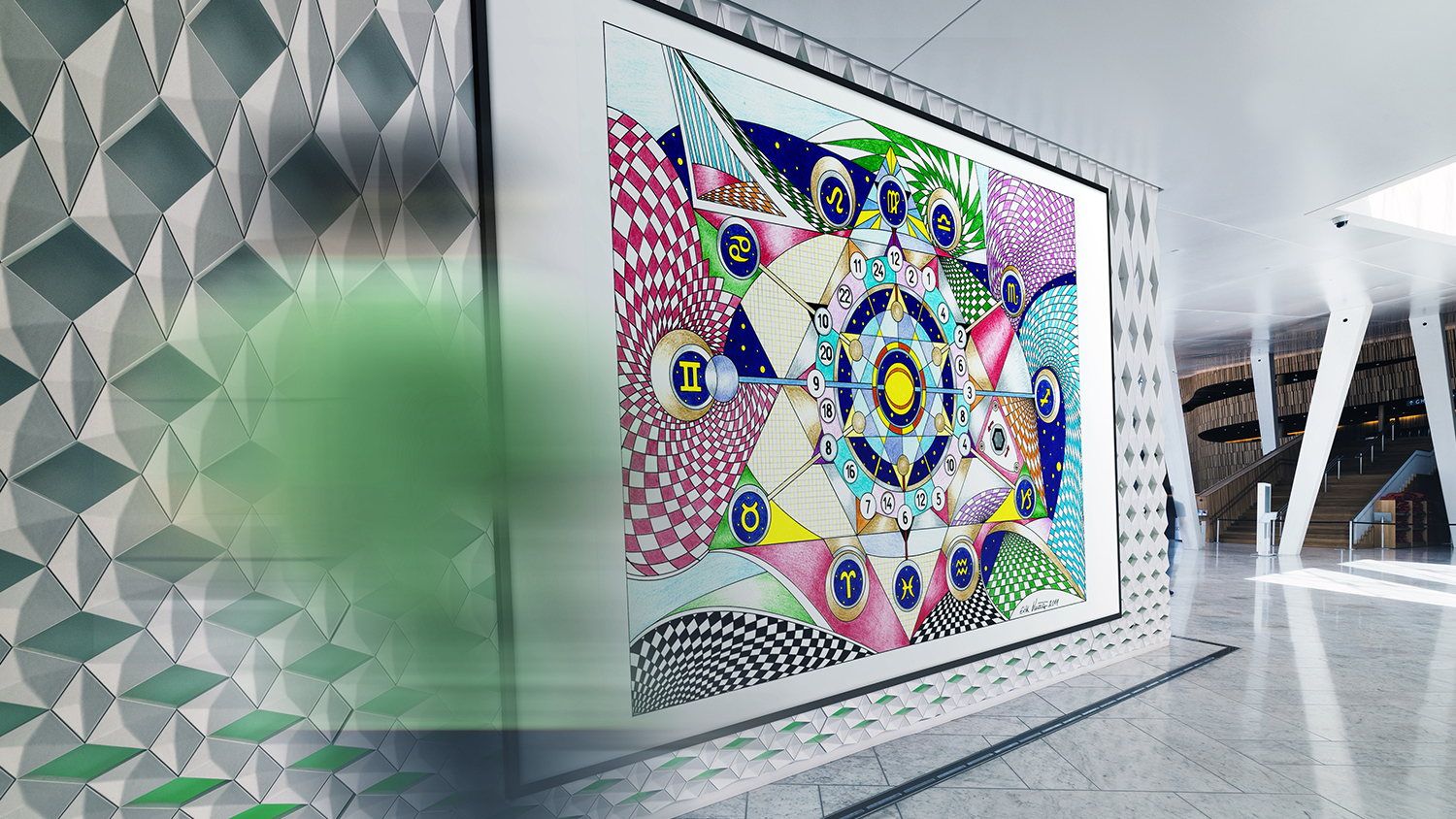 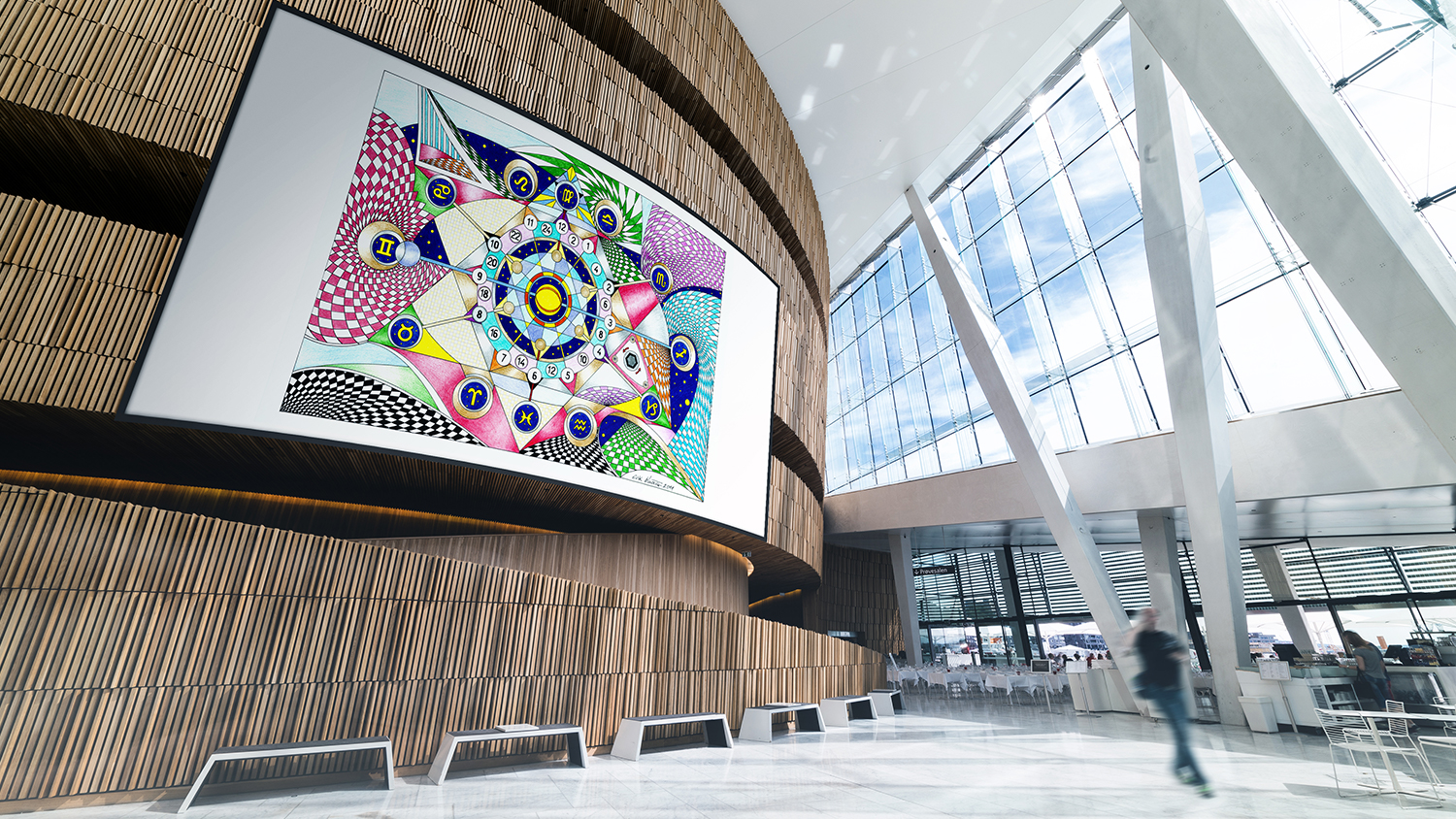 New Beginnings is the story of the beginning of the New Year; our Rosh Hoshanna.

This picture has many symbols which are used to show connections between the 12 Astrological signs, the sun and the moon and the months of the Hebrew Calendar.

First attention is shown to the outlying symbols used to represent the 12 Astrological signs, each one falls as closely near to the Hebrew month in which this symbol may take precedence.

In the center of the image we find the sun, which is the source of light radiating to all other images in the picture.

Off to the side in the 9 position (as if juxtaposing a clock over the entire work), we find the moon. The Sun radiates its light to the moon, which without this light, would be just a cold dark satellite in the sky shedding no light upon the earth in the night. As this work is called New Beginnings, it represents not only the beginning of the year, but all beginnings, even our beginning. When one thinks of our beginning, thoughts may then turn to Genesis. In Genesis we find Adam, the first human upon the Earth and thus the beginning of mankind. Taking the name Adam, we find the digits of the numbers which are represented by the Hebrew letters in the name Adam, we get the small (or mispar katan) number 9. As the moon radiates his light upon the Earth as a reflection of the light radiating from the sun, so too does Adam radiate the light of G-d upon the Earth.

Within the picture’s center we find a multitude of concentric Stars of David. The most obvious Star is the found most closely around the Sun. If the viewer were to take any one the 1 – 12 numbered points on this Star of David and then find its other coordinating colors, one would trace one half of a Star of David. If the viewer again takes any other of the 1 -12 numbers and traces its coordinating colors, one would find the other half. For example, take the numbers 11 and 12. These two numbers are represented with the colors purple and orange. The corresponding numbers are then 12, 8, 4 (purple) and 11, 7 and 3 (orange). These two triangles will then intersect perfectly to create a Star of David. This works every time and with every combination of the numbers 1 -12.

1 -12, which are symbolic of the astrological signs as well as one half of a day. We also find the numbers 13 – 24 which are the continuation of the numbers 1 -12 adding up to the hours of the day.

12 points which are colored also represent all the 12 edges of the Star of David. The points are all colored in groups of 3. As 12 is the number of the tribes of Israel, the number 3 represents the grouping of these tribes by area. All the areas of the map represented by the tribes: 3 to the East, 3 to the West, 3 to the South and 3 to the North.

New Beginnings is the Start of the New Year, and it represented numerically here in Hours, Months, Rotations of the sun and the Moon and the signs of the Astrological chart. One can view this work not only as calendar or clock, but also as a type of Sundial. At the triangle above the number 12, we see it is filled with the many vibrant and radiating colors. These represent the time of year when the sun peaks at noon and gives off most of its light.

Each time one views this work there is something new to see and experience. Stand at a different point, look from a different angle and let this magnificent work take you on a very special journey to the beginning and beyond.