Hand of the universe 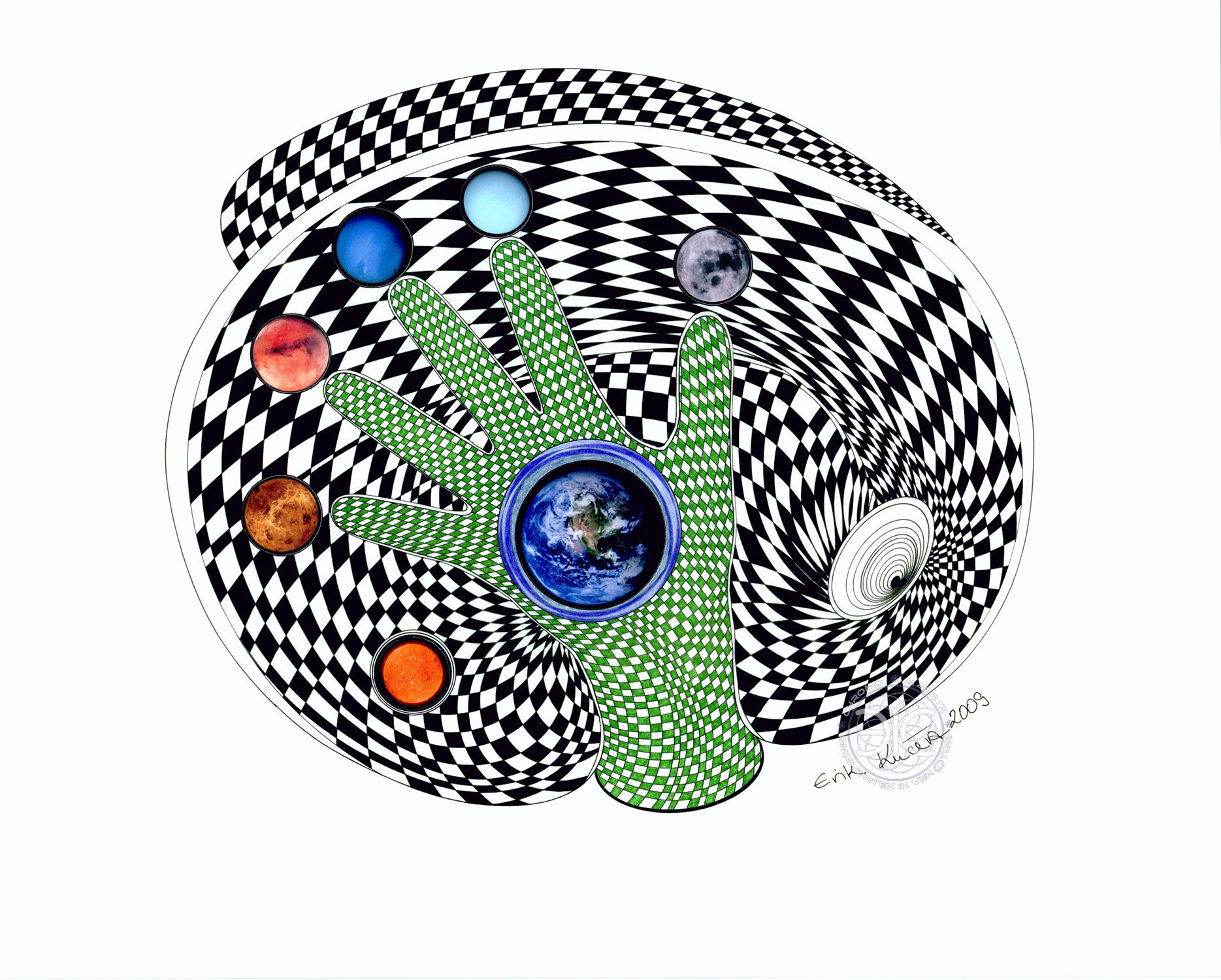 Hand of the universe

Symbolism in „ Hand of the Universe” by Erik Kučera

In this image we see the universe depicted as the darkness of space which is coming from on origination point which looks like a vortex or black hole, but at the same time also like a speaker. In this sense we are seeing the birth of the universe from the word of G-d as it was first spoke into being and then through the “Hand of G-d “ was then created.

Around the hand we see the moon, Neptune, Uranus, Jupiter, Mars and Venus around the Hand and in the middle is the Earth.

First we see the moon – as taken from chabad.org: "In the first mitzvah commanded us as a nation, G-d decreed that we link our lives to the moon. He instructed us to establish a calendar that is predicated upon the lunar month—the 29.5-day cycle in which the moon, as perceived by an earthly observer, completes its revolution around the earth."

Next Follows Neptune: Neptune is showed here on the second finger as it is one of the planets that rules Pisces, which is the Central Column of the water signs and G-d created water on Earth on day two. Neptune is also the planet which controls intuition, imagination, creativity and art – it gives us the ability to see and understand all that which lies beyond our five senses.

Next we have Uranus, placed in the middle of the hand – Uranus is the planet of judgment, order, responsibility, discipline and laws. Uranus is actually the 8th planet which takes us beyond the limits of 7 (7 days, seven colors, seven notes, etc). Uranus elevates humans to new consciousness and new concepts outside of our thoughts of limitation. Uranus connects with the element of air which is intellectual and innovative. Uranus is also found in the middle of the hand as it is the planet which orbits the Sun every 84 years which explains the “midlife crisis” that comes around 40 -42 when we question life’s purpose and make plans for the next 40 years or so.

In fourth place on the hand we have Jupiter: Jupiter is the planet of success, miracles, expansion and our extension into our spiritual ability. Jupiter controls fire, so we see another element represented on the hand. We find Jupiter- which rules the central column of fire signs, on the fourth finger as well to represent the 4th day of creation when the Sun was created. Jupiter also represents the desire to learn, to know, and the fields of science, biology, education and music.

On the fifth finger we find Mars – Mars is the planet of war, which allows us to wage war on the conflicts of our own lives. Mars helps us to infuse the year with consciousness in any war zone, whether it be between countries or people or our own conflict within self to do for the self alone or to share. Mars rules the month of Nissan which is the beginning of each New Year and it is the new battle to begin to fight against negativity, chaos and slavery and enjoy order, freedom and positivity.

On the long fleshy side of the palm we find the planet of Venus – Venus is an Earth sign, and although we find the Earth in the middle of the hand as well, Venus is the planet which rules love, couples, money and art. Since Venus controls money and the side of the hand is used here to represent the importance of Tzedaka (or Charity) for balance in our lives and in the universe.

Lastly in the middle, we find the Earth in the middle of the palm of G-d as it was the planet chosen to be fertile and create life in G-d’s image. Also, we see that the Earth takes a central place within the universe as well because the Earth is the center point of all the concentric Kabbalistic spheres. Sun, Moon, elements, and the metaphysical all play a part in the intricate workings and happenings upon the earth and its inhabitants.